In this video, Larry talks about “High Performance Production,” a program on how to increase your dollars per crew, per week. Or how to install more work each week while keeping quality high.

Prior to High Performance Production, Larry’s company had a revolving door of production crew members. The foreman looked at their work with his company as a job, not as a career.

Foremen and helpers stayed around until they found other jobs. Laborious work at an hourly pay rate is not a great career choice.

Besides looking for other jobs, crews would work slowly and find excuses of why they couldn’t work. Forgotten tools made for excuses to drive back to the shop or run out to a supply store. Lunch and coffee breaks could find the crew and truck miles away from the job picking up food.

While this went on, the customer wasn’t happy either. While the work is being done on the house, the customer (and even their neighbors) is watching how the team is performing. When the customer sees too many breaks or the truck coming and going this makes them feel cheated. It makes the customer feel that they overpaid for the job.

Prior to High Performance Production being implemented, when workers are being paid hourly, jobs took longer to install and thus were more costly to install.

Between the mentality of working for an hourly wage and working for a result, there is a gap. In that gap is the secret to… 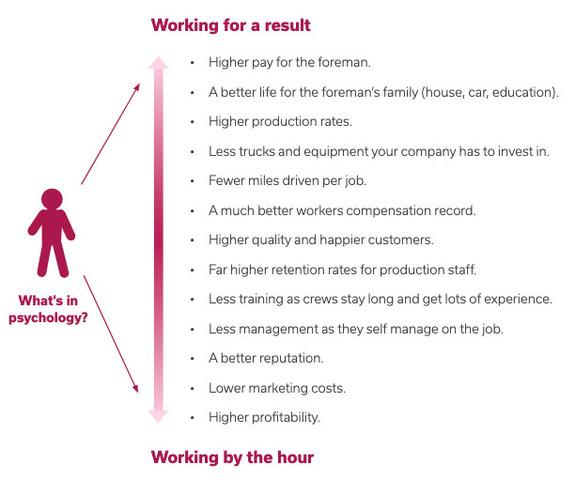 Each of these bullets are at risk if you don’t solve production problems.

Plus, if you don’t solve production problems, you are going to find it difficult to grow.

Workers who have no incentive to work faster, usually don’t.

In fact, there is a negative incentive if there is no positive one. If the crew works faster, the reward is to get more work to do.

Your crews are on the road and are not supervised like in a factory environment. At these remote job sites there is a lot of room to slow things down.

Designed to Cause Friction

When leadership and management want one thing, and the production workers want another, there is going to be friction.

Management wants high production rates and higher quality. Workers want to put in hours and want to make the work as easy as possible.

Management wants a greater result in less time. Workers want to do less in more time.

You can see where this sets up policing, arguments, and an “us vs. them” situation. This is not good for anyone.

What if both management and workers wanted the same thing? High production rates and high quality. Would we likely get these results? Yes.

Would friction between the management and production workers go away? Yes.

Management wants the crews to get right to work, don’t waste time, and get the job done. Blast through the difficult parts. Squeeze inefficiencies out of the day. Find ways to get things done faster and innovate. And make the customer happy!

These are the thoughts of management whose upside is to control cost be profitable.

What if you could get the foreman to think this way?

The foreman is with the crew all day. More than anyone else, the foreman knows how to squeeze inefficiencies out of the work. He can make things go much faster if he was incentivized to think that way.

If the incentive was that the foreman could earn more money if the job got done faster with minimal problems, solved on the spot, then he would work toward that.

By aligning incentives the foreman will quickly figure out what he has to do to benefit.

The answer to production problems is “High Performance Production” by incentivizing your foreman in a positive way.

The “High Performance Production” program can be worth thousands, tens of thousands, hundreds of thousands or millions depending on the size of your business and the amount of time this program runs.